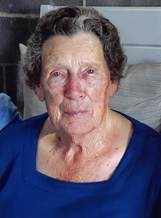 Joanne Cowan (Gibbs) Miracle, 85, of Harrogate, TN went home to be with her Lord and Savior Jesus Christ on the afternoon of July 29, 2022.  She was in the presence of loving family and friends.  Joanne was a beloved mother, grandmother, wife, sister, aunt and friend.  She attended Mt. Gilead Baptist Church in Harrogate and was a special member of her Hardee’s crew in Harrogate.  She was dearly loved by all who knew her.

She is preceded in death by her parents, Leman and Mabel Cowan of Cubbage, KY; her late husband, John Leslie Gibbs; her daughter, Sheila Gibbs Miracle; her step-daughter, Faye Gibbs and her two step-sons, Cecil and Jim Gibbs, all of Harrogate.

Shumate Funeral Home is honored to serve the Family of Joanne Cowan (Gibbs) Miracle and is entrusted with all arrangements.

Candle Lighting and Guestbook is available at www.shumatefuneralhome.com